The Secret Gospel According To Mark


The Secret Gospel According To Mark 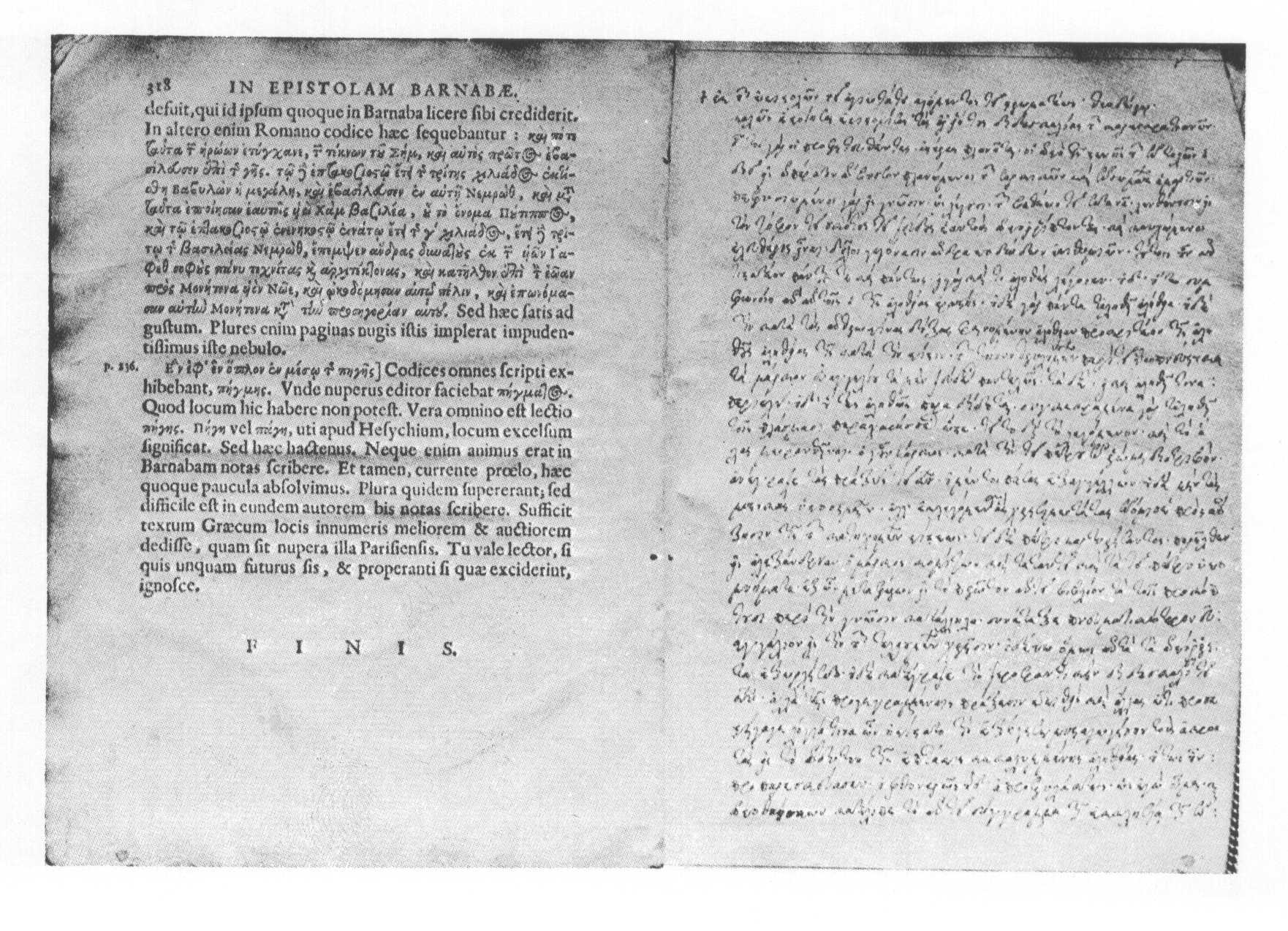 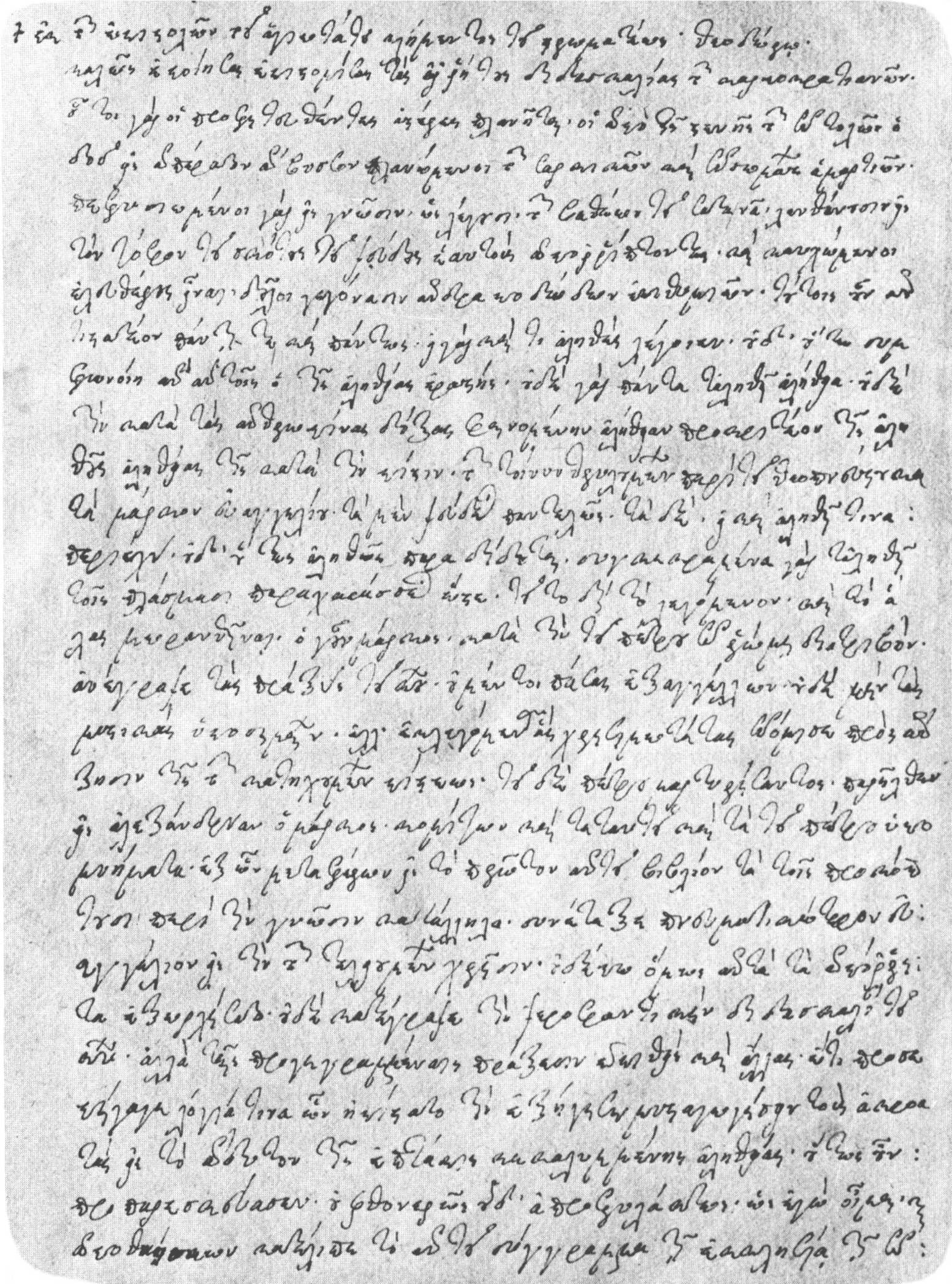 Folio 1
Folio 1:
01 From the letters of the most holy Clement of the Stomateis. To Theodore:
02 You did well silencing the unspeakable teachings of the Carpocratians.
03 For they are the prophesied wandering stars. From the narrow road of the commandments
04 they are wandering into a boundless abyss of carnal and bodily sins.
05 For having been puffed up in knowledge - as they call it - of the depths of Satan, they fail to notice
06 that they are throwing themselves down into the darkness of dark lies. And having boasted
07 that they are free, they have become slaves of servile desires. With these people, then, it is
08 necessary to check them constantly and in everything. For even if they say something true, still
09 the lover of the truth should not agree with them. For not all true things are truth.
10 One must not value what human opinion considers truth more than the
11 true truth, which is recognized through faith. Now, concerning their babblings about the divinely
12 inspired Gospel according to Mark: some are wholly false while others, even if partly true,
13 are still not completely true. The true parts, because they have been mixed
14 with invented stories are debased so that, as the saying goes, even the
15 salt loses its flavor. As for Mark then, during the time when Peter was in Rome,
16 he wrote up the deeds of the Lord, not actually recording everything, nor
17 hinting at the mysteries, but instead picking out the things he thought would
18 increase the faith of those being taught. Then, when Peter was martyred, Mark went
19 to Alexandria, bringing both his knowledge and the things he remembered hearing from Peter.
20 From what he brought, he supplemented his first book with the appropriate items
21 about knowledge for those who are making progress. He arranged a more spiritual
22 gospel for the use of those being perfected. Nevertheless, he did not reveal the things
23 which are not to be discussed. He did not write out the hierophantic instruction of the
24 Lord, but added other deeds to the ones he had already written. Then, he
25 added certain sayings, the interpretation of which he knew would initiate the hearers
26 into the innermost sanctuary of the truth which has been hidden seven times. This is the way
27 he prepared them, in my opinion, not ungrudgingly or unguardedly. And
28 when he died, he left his writing to the church in 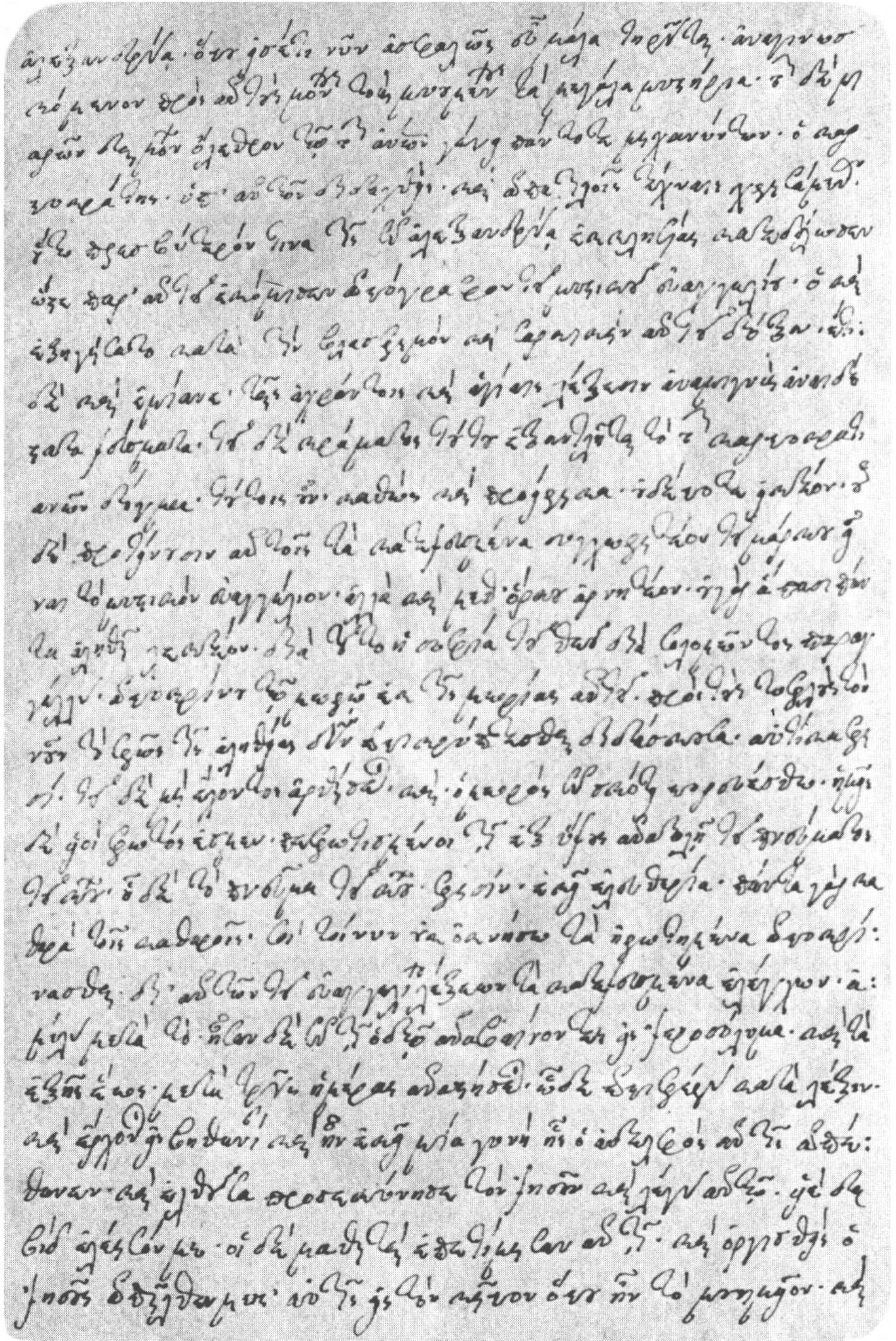 Folio 2
Folio 2:
01 Alexandria, where it is even now still extremely carefully guarded, being read
02 only to those who have been initiated into the greatest mysteries. The miserable
03 demons, however, are always devising destruction for the human race.
04 After being taught by them and using their deceptive arts, Carpocrates
05 was able to enslave some elder from the church in Alexandria
06 and get the written part of the secret gospel from him. And he
07 interpreted it according to his blasphemous and carnal opinion. Still
08 he defiles it, mixing with the most undefiled and holy narratives the most
09 shameless lies. The teaching of the Carpocratians is derived from this mixture.
10 Therefore, one must never yield to them, just as I said before. Also, one must not concede
11 to them that the secret gospel is from Mark, when they put forth their lies.
12 Rather one must deny it, even with an oath. For one does not have to speak
13 the whole truth to everyone. For this reason the wisdom of God declares through Solomon,
14 "Answer the fool from his folly," teaching that, from people whose minds are blinded,
15 the light of the truth must be concealed. At once, she (Wisdom)
16 says, "From the one who has not, it will be taken," and, "Let the fool go in darkness."
17 But we are the children of light, who have been illuminated in the rising of the heights of the
18 spirit of the Lord. "Where the spirit of the Lord is," she says, "there is freedom." For all
19 things are pure to those who are pure. So I will not hesitate to answer the questions for you,
20 exposing their lies from the actual words of the gospel.
21 At any rate, after the part, "They were going up on the road to Jerusalem" and the following things
22 until, "after three days he will arise," it takes up according to the text:
23 "And they went to Bethany and there was a woman whose brother had died.
24 And coming up to him, she prostrated herself before Jesus and said to him, 'Son of David,
25 have mercy on me.' But the disciples rebuked her. And becoming angry,
26 Jesus went with her to the garden where the tomb was. And 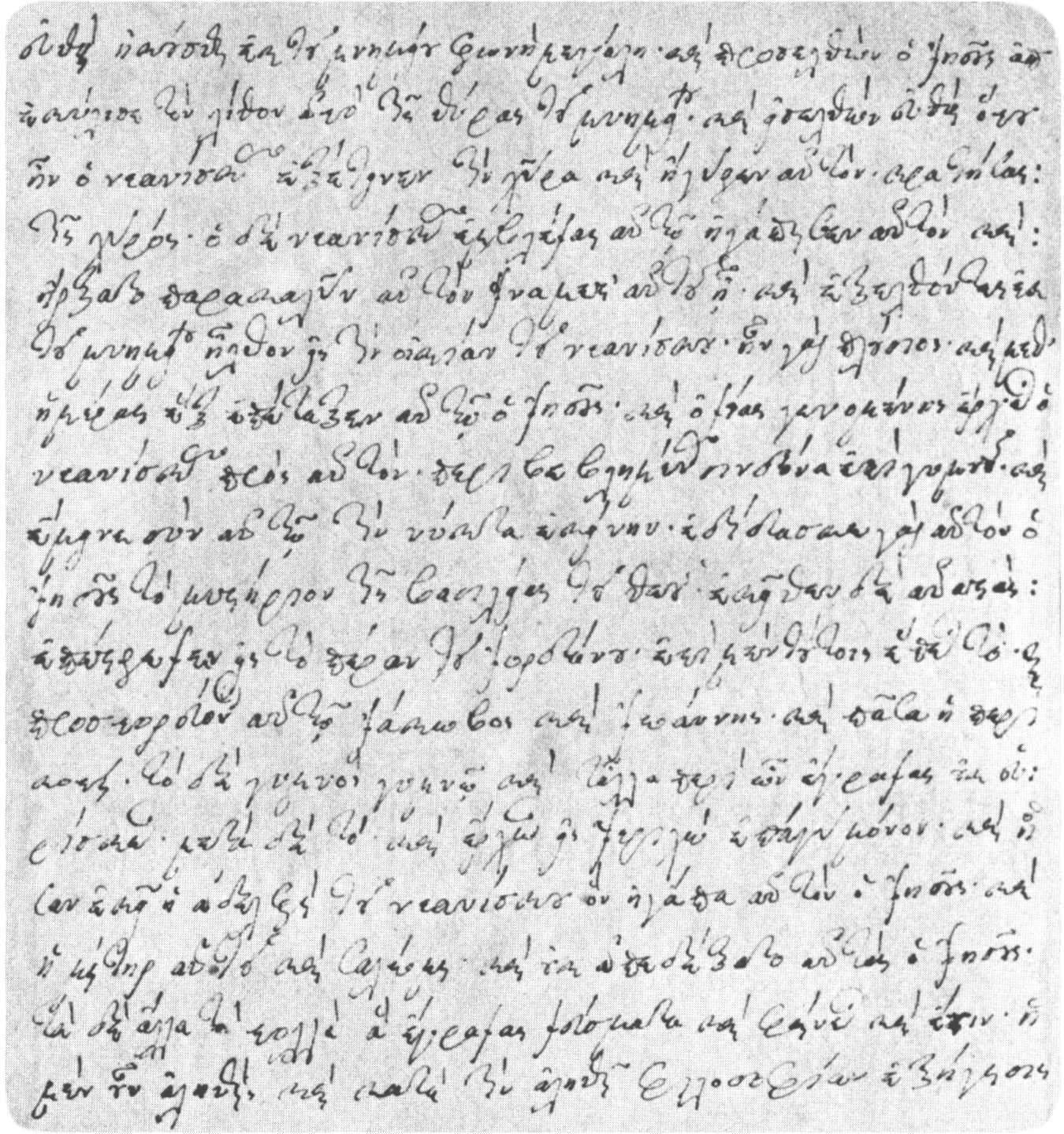 Folio 3
Folio 3:
01 immediately a great sound was heard from the tomb, and Jesus, going toward it
02 rolled away the stone from the entrance to the tomb. And going in immediately where
03 the young man was, he stretched out a hand and raised him up, holding
04 his hand. Then, the man looked at him and loved him and
05 he began to call him to his side, that he might be with him. And going from
06 the tomb, they went to the house of the young man. For he was rich. And after
07 six days, Jesus instructed him. And when it was late, the young man went
08 to him. He had put a linen around his naked body, and
09 he remained with him through that night. For Jesus taught him
10 the mystery of the kingdom of God. After he got up from there,
11 he turned to the region of the Jordan." And after these things, this follows:
12 "James and John go to him," and that whole section.
13 But the "naked man with naked man" and the other things you wrote about are
14 not found. After, "and he goes to Jericho," it adds only, "And the
15 brother of the young man whom Jesus loved was there, as well as
16 his mother and Salome. And Jesus did not welcome them."
17 But the many other things which you wrote both seem, and are, most false. So,
18 the truth according to the right interpretation. . .